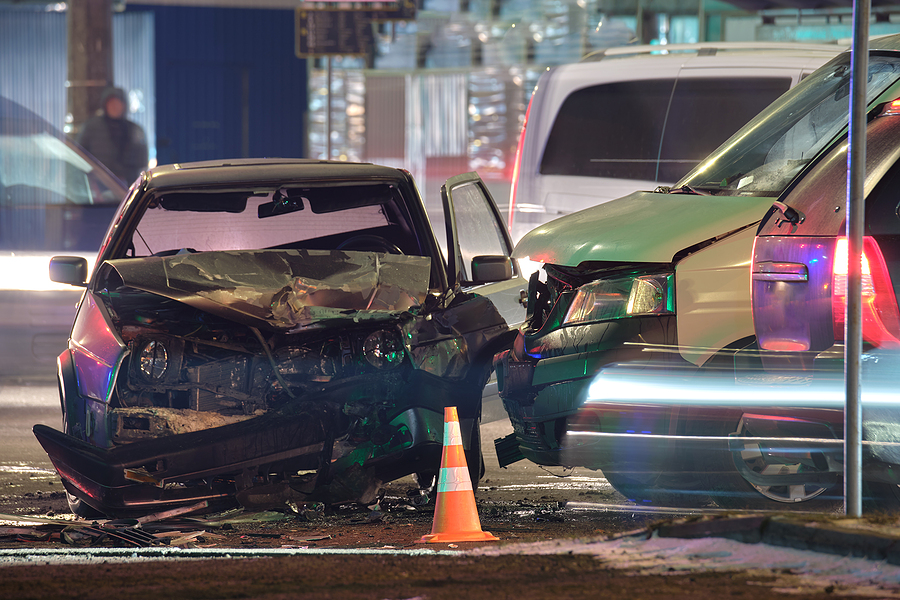 Of all the different types of car crashes you could have, head-on collisions are likely the worst. When two cars traveling in opposite directions crash into each other at the front end, the result is similar to crashing into a wall. The impact is tremendous.Head-on collisions usually happen between two cars traveling at high speeds and frequently involve at least one fatality. They comprise about 2% of all car crashes but are some of the deadliest. Even at a slower speed, the results can be devastating. Those who survive the accident suffer severe physical and emotional pain as well as considerable accumulated medical expenses.

Head-on collisions most commonly occur on rural roads. Many rural roads are two lanes, one in each direction, without much room for error. But these accidents can also happen in urban areas, with multiple lanes on each side.Frequently, a driver who moves over into a lane of oncoming traffic causes an accident. Whereas a rear-end accident only involves one driver in motion, the head-on collision has two, doubling the force of the impact.It's the force of two vehicles hitting each other that makes these accidents so dangerous. For instance, two vehicles traveling at 25 miles an hour that meet head-on each feel the 50-mile-an-hour force in the crash. Two vehicles traveling at 50 miles an hour means both vehicles will crash with a force of 100 miles an hour.Drivers have a duty of care to drive safely and prevent harm to others. Ignoring that duty can constitute negligence, including:• Intoxication, which inhibits one’s driving• Distracted driving, especially talking or texting• Fatigue, especially when a driver falls asleep behind the wheel• Wrong-way driving, on a one-way road, highway, or freeway entrance/exit ramp• Speeding around curves and losing control of the vehicle• Drivers who are unfamiliar with the road• Inexperienced or elderly drivers who may become confused when they enter a freeway using a ramp that leads to the wrong side of the road• Drivers who misjudge when passing another vehicle in the left lane or in a no-passing zone and are unable to avoid an oncoming vehicleDespite signs, traffic lights, lane markings, barriers, and other traffic control devices, these types of accidents still happen. The cause of most of these head-on collisions is someone’s negligence.InjuriesBecause head-on collisions are so much more dangerous, the injuries that accompany these accidents are usually more severe. While the injuries may include the usual broken bones, lacerations, concussion, and other common accident injuries, these collisions include catastrophic injuries such as:• Whiplash• Neck injuries• Head and facial injuries• Traumatic brain injuries• Internal organ damage• Paralysis• Spinal cord injury• Lower leg injuriesThese are life-changing and bring significant financial hardship in addition to emotional injuries. Head-on collisions lead to significant loss of work time when you are faced with high medical bills. A person in a head-on collision may have long-lasting physical as well as emotional pain.

Of course, one of the first questions is who was responsible for the accident. An investigation can determine the party at fault.When you are able, one of you are first tasks should handle is to begin working with a Kansas City car accident attorney. They will investigate your accident to determine negligence and liability.It is important to begin working with an accident attorney right away. Even though Missouri’s statute of limitation provides five years, investigations, expert witnesses, and building a case take time. If you wait too long, your attorney would not be able to build an effective case for you. Insurance companies will also stall because they know you won't be able to sue them.An accident attorney can also ensure that you receive fair compensation for your injuries. Damages may include medical expenses, lost wages, lost career, and future wages, as well as non-economic damages like pain and suffering.

Since 1918, The Popham Law Firm has helped hundreds of people in many accident types, from simple fender benders to awful head-on collisions involving major injuries and property damage. We'll be happy to review your case and let you know how to proceed.Contact us at (844) 243-2288, or use our online contact form to get started.