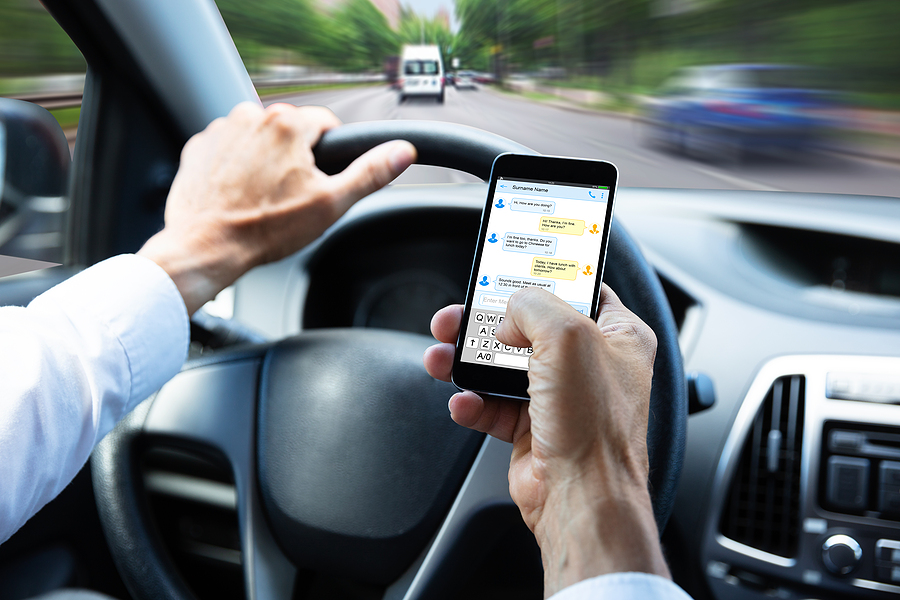 Dangers Of Texting While Driving

Technology has greatly improved our lives. A smartphone puts considerable power in the palm of your hand. But there’s a downside, such as texting while driving, and anyone with a smartphone understands the constant distraction of pinging notifications. Email, text messages, plus weather, news, and social media apps can be a never-ending cacophony that takes your attention away from safe driving. Conversely, ignoring the phone can be frustrating, especially when you are expecting an important message and need to respond.

But consider this question: is the message important enough to risk an accident?

Since the introduction of the smartphone, drivers have become increasingly distracted and causing more accidents than drunk driving. Data from the National Highway Transportation Safety Board (NHTSB) shows that 1,000 people are injured and nine killed every day because of distracted drivers, primarily from cell phones. Younger drivers from 16 through 24 tend to be the most common users.

Talking on a phone while driving can be difficult enough. But texting raises your risk of an accident considerably. A driver turning their attention away from the road for five seconds to look at a text at just 55 mph is the equivalent of driving the length of a football field without looking. It also takes a few seconds longer for the driver’s attention to fully return to the road and driving conditions. The driver’s reaction time is greatly reduced long enough to have a crash.The National Safety Council reports that multitasking is, indeed, a myth. Talking instead of texting isn’t safer because of the distraction factor, and can slow reaction time in the same fashion as alcohol consumption.The likelihood of an accident increases 23 times when a driver is trying to text at the same time as driving a car. But even though most people know they shouldn’t do it, they think they can. Consider how many times have you heard someone declare, “I know what I’m doing,” when clearly, they don’t. When a driver tries to split their concentration between two separate activities, it leads to substandard driving and a much higher chance of an accident due to non-attention.Teenagers are the worst offenders, and deaths due to texting while driving has surpassed drunk driving as the leading cause of death in this age group. More than 3,000 teenagers die every year due to texting and driving.Unfortunately, adults are also guilty of doing what they know they shouldn’t. Among all drivers, cell phone usage is involved in a whopping 1.6 million car crashes every year. These accidents involve over 500,000 injuries and 6,000 fatalities.Single-car accidents are also likely, such as hitting a barrier, tree, or pole. Even if the driver isn’t injured, which is highly unlikely, the insurance company will substantially increase the driver’s premiums as a result.The driver who hits someone else while texting and driving will also face the possibility of a ticket, higher insurance rates, and being sued for other driver’s personal injury expenses.

Are There Laws Against Texting While Driving?

While there is no nationwide ban, different states have a patchwork of laws that govern cell phone usage while behind the wheel of a vehicle. Missouri does have some laws that prohibit drivers under 21 from texting and driving since they are the most common offenders.Section 304.820 of Missouri law delineates “text messaging” like reading, writing, or sending electronic texts or emails. Drivers can pull over and stop when using the phone for texting. Voice functions are permissible, even though they’re not really safer.People driving emergency vehicles or using a smartphone to summon emergency assistance are exceptions to the law. The law applies to all cell phones except for those installed in vehicles.After the age of 21, drivers are not prohibited from using handheld phones but face the same risks and consequences if they are in an accident.

Since 1918, The Popham Law Firm has helped hundreds of people in all kinds of accident cases, from simple fender benders to accidents involving injuries and property damage. We’ll be happy to review your case, let you know if you have one, and how to proceed. Contact us at (844) 243-2288 or use our online contact form to get started.